On a sultry Sunday afternoon, we were welcomed by artist-curator Sudarshan Shetty along with co-founders Riyas Komu and Bose Krishnamachari and Kochi Biennale Foundation CEO Manju Sara Ranjan at Aspinwall House, a heritage property by the sea and the primary venue of the Kochi-Muziris Biennale (KMB). Visibly exhausted and nervous about speaking in front of the group that had gathered around him, Shetty began to walk us through the estate. Explaining his title for the third edition he said, “‘Forming in the pupil of an eye’ is not an image of one reality, but a reflection of multiple realities and possibilities in time. This biennale is intended as a dialogue between multiple perspectives and possibilities as it evolves within the space, through its duration, and beyond.” Having attended the previous edition curated by Jitish Kallat, my mind constantly volleyed between what I’d seen the last time, and what was in front of me now. Walking through the same spaces, I was struck by the breadth and diversity of work assembled in one place. 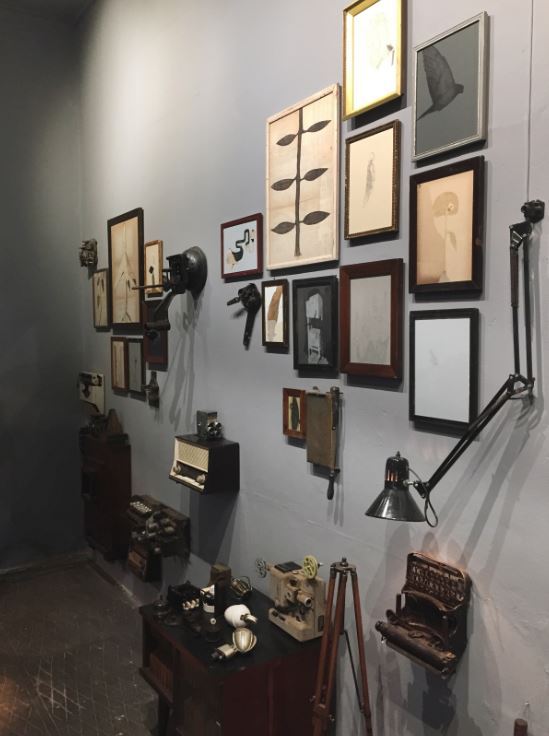 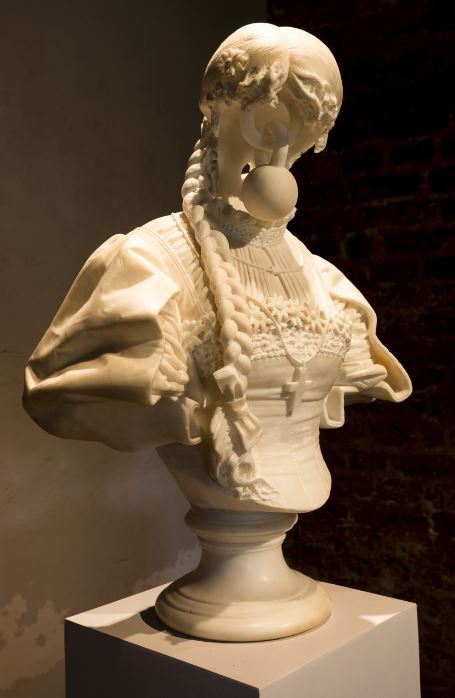 For instance, on entering one of the buildings, I encountered Kochi-based P. K. Sadanandan’s expansive, unfinished mural being worked on by two painters, while directly across from it, Anamika Haksar’s ‘performance poem’ about Dalits, based on the works of Namdeo Dhasal, was under way. The next room led to Traces, Gauri Gill’s photo series documenting handmade graves, followed by Desmond Lazaro’s mixed-media Family Portraits, a combination of video, small frames and large hanging screens. Further in was Dia Mehta Bhupal’s life-sized Bathroom Set. Around the corner, a video installation by Wu Tien-Chang was set to the soundtrack of a kitschy Taiwanese folk song; next door, American mathematician Miller Puckett’s ‘sound portraits’ of four composers played in adjoining rooms. Contemporary art encompasses all of these things, and we’d only just gotten started.

Over 30,000 visitors strolled through the exhibitions spread across multiple locations in historic Fort Kochi during opening week in December, partaking in Shetty’s massive undertaking. The title this year was taken from a poem by Sharmistha Mohanty, also participating in KMB. “What I was trying to say (with the line) was that a large consciousness can gather the world together in himself or herself. And in a sense the biennale is doing that, it is gathering many visions of the world,” she elaborated. Her site-specific poem I make new the song born of old is projected in a darkened room, with glimpses of passing ships and birds through window panes breaking up the space.

An emphasis on multiplicity and disparate perspectives was tacit. As Shetty explained, he wanted to include practices that were often excluded from the mandate of a biennale — poetry, dance, theatre, mobile lecture tours, architecture and others. In fact, he set the tone when he announced the very first KMB artist, Chilean poet-revolutionary Raúl Zurita. To fully take in his work The Sea of Pain, a response to the Syrian refugee crisis, one must wade through a vast room filled with seawater, following his words written across four enormous panels.

There was no fixed route to follow, no place where one should ‘start’ from. One could meander through galleries or choose to follow Argentinian author Sergio Chejfec’s 88-chapter novel, painted on walls all around Fort Kochi. You could even put your faith in the hands of Swedish artists Christer Lundahl and Martina Seitl and take a blindfolded tour of KMB. Trained actors posed as guides, while headphones played ambient noise and instructions to follow, invoking an entirely diﬀerent experience altogether.

At a panel discussion during opening week, art curator and writer Natasha Ginwala declared that ‘All biennales are construction sites’. While she may have been referring to the gathering more conceptually, all around us was proof of what she meant. Almost overnight, a large number of works miraculously appeared. A step outside the temporary theatre pavilion in Cabral Yard, one of 12 venues at the KMB, led you to scaﬀolding and rubble; this was a ‘work in progress’. Dr Robert E. D’Souza and Dr Sunil Manghani, who have extensively researched KMB in their recent book on what they term ‘India’s biennale eﬀect’, have noted that participating in Kochi ‘suggests an invitation to build it rather than to be placed within it’. Walking through the galleries — reclaimed factories and warehouses used for storing everything from coconut oil and spices to timber and rubber centuries ago — one encountered artists busy on their pieces, shelves filled with pigments and utensils; the mise en scène of a working studio.

Art is as much about the process as the final work, but so much that happens along the way is glossed over in lieu of the end-product. Here, the curtain was pulled back and visitors were invited into a performance of a diﬀerent kind — the act of making. Many of the artists in this edition have been trained in traditional crafts and forms such as miniatures, pichvai, Islamic geometry, embroidery and so on; those like British-Indian Lazaro and Saudi Arabia-based Dana Awartani, who have spent years mastering a style and technique, before breaking out on their own. Here again we saw Shetty’s practice of collaborating with skilled craftsmen coming through. Tradition and modernity were continuously in conversation, also evident in the daily performances of Hindustani classical music, South Indian Nangiarkoothu dance and Manganiyar, a blend of Rajasthani folk and Sufi music, through the week. 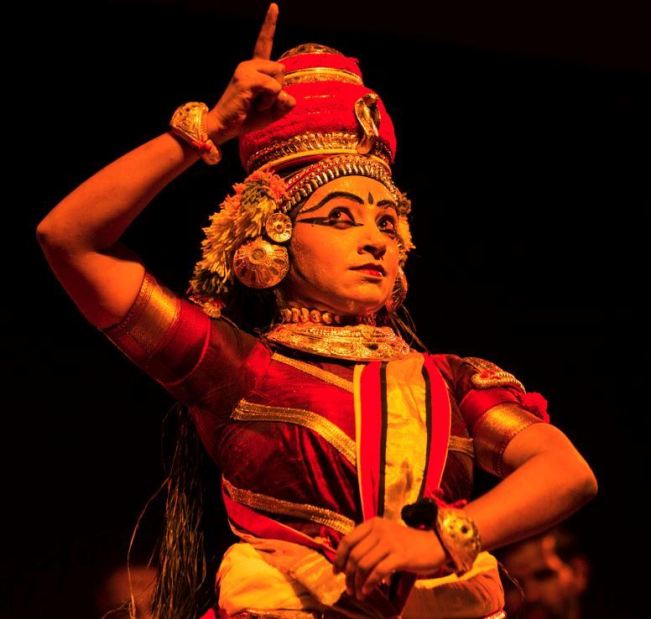 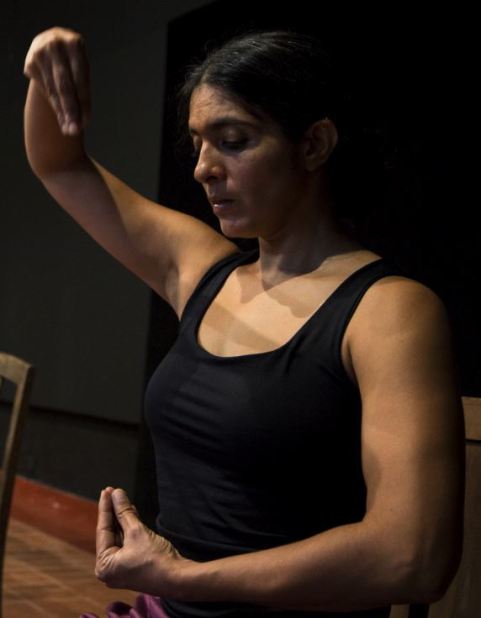 Whereas previous editions were more visually-oriented, the pieces in this edition, which were more abstract and conceptually-driven, may require a little more hard work and intellectual investment from the audience. Rather than be deterred, the KMB team perceives it as the next logical step in its evolution. With every year, they hope to provoke people to question their notions about art and creativity. “If you get the same thing again and again, there’s no point in doing it. The minute we say, ‘We’ve got the Indian biennale sorted out’, it’s over, it’s time to stop,” adds Lazaro. Created by and for artists, it brought in an unmatched authenticity in its intent. The core team focusses their energy on creating infrastructure for appreciation and education by bringing art to the masses.

Those expecting immaculate white cubes and a calendar of VIP-only soirees were in for a surprise. “We consider everybody equal and important. We opened our doors on 12/12 at 12 p.m. to everyone, which is not the usual case for any other biennale. This kind of atmosphere doesn’t exist anywhere else,” said Krishnamachari. After all, where else can salt-of-the- earth Keralites in mundus rub shoulders with the Indian culturati? KMB is diﬀerent from all other versions in its unabashed inclusiveness; one senses that pride and feeling of ownership even among locals. This approach, said Lazaro, “does not lead to a slick, finished product…. It will take another month to get all the video screens working, for people to begin producing in these studios, and a dialogue to start happening among people looking at the work while someone is making it.”

Traversing the streets of Fort Kochi, you quickly realise how the ‘biennale’ has absorbed into the vernacular. Storefronts embellish their windows with items to attract a more discerning visitor, and prices are correspondingly augmented overnight to match their reportedly deeper pockets.

Conversely, one finds it hard to extract the city, the ‘site’ from the art on display. Starting with the exhibition spaces, where no attempts are made to mask their age and state of decrepitude. They are simply restored and repaired to a functioning condition, evidence of their former lives often left intact. The sea is never more than a few feet away and catching a glimpse of the water traﬃc every so often is a reminder of the city’s heritage as a major port for trade. Sotheby’s deputy director and specialist, modern and contemporary South Asian art Ishrat Kanga remarked, “That’s the point of a biennale, for it to be a site-specific installation in situ, the artists are supposed to be aﬀected by the space they are in and working with. So if you go to the same room each time, you see it completely transformed.” In bustling Mattancherry, one must navigate through the narrow streets flanked by tea purveyors and sugar merchants in search of galleries. The aroma of dried chillies wafts in.

The works that most resonated with me were the ones that could envelop you, where rather than it entering your personal space, it forced you to enter it — that feeling of moving around within an artist’s creation, and by extension his or her mind. On my last day in Kochi, stuck in an auto on Bazar Road on my way to check out one last installation, the rickshaw driver turned around and asked if I had been to the biennale. When I told him that’s why I was here, he admitted that he had been too, and he’d liked a few things he’d seen at Aspinwall House. He then pulled out his camera phone and aimed at a man resting just-so against his cart of sacks, and waited patiently to capture the perfect moment.

common place is a selection of writing on art, design and culture. All text is copyrighted unless otherwise specified. Please do not reproduce without written permission.