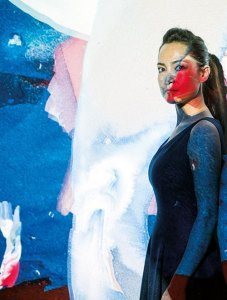 Every night last October, at exactly 11:57 p.m., enormous LCD screens studded with advertisements, and logos that lit up New York City’s Times Square, were suddenly overrun by swarms of black, bird-like shapes. Undulating around the popular tourist landmark, the animation stopped  passers-by in their tracks, as they waited, mesmerised, for the punchline or a brand’s logo. But at the stroke of midnight, none came. Instead, a black screen displayed the text ‘Shahzia Sikander, Gopi-Contagion, 2015’.

For Sikander, the MacArthur ‘Genius’ who now calls New York home, the Midnight Moment series — the collaboration with the Times Square Advertising Coalition — was the culmination of a long journey, which began with her childhood in Lahore, followed by her education at National College of Arts’ (NCA) famously rigorous miniature department in the ’80s. Sikander made waves right from her student days. Her thesis project earned her the Haji Sharif award for excellence in miniature painting and the Shakir Ali award for merit in creativity alongside a distinction and place on the principal’s honour list, all at once.

Awards aside, her painting, The Scroll, is cited as the work that singlehandedly disrupted the practice of miniature art and turned it on its head. More than five feet long and about a foot high, it challenged the scale of traditional miniatures and infused personal imagery taken from Sikander’s own life where there ought to have been princely courts and idyllic pastures. “My interest in miniature painting happened at a time when it was more of an anomaly amid the highly Westernised teaching methods. It was regarded as insignificant and it represented the unpopular. It was precisely its status as the underdog that inspired me to launch an inquiry in to reconstructing it from within its canon of historical representation.”

Sikander, born in 1969, grew up in a close-knit ‘family of storytellers’, she writes, in an essay for a major American newspaper. Literature offered a means to escape from the repressive political climate around her. ‘My father was an enthusiastic narrator, with oratory prowess. My first memory is of him reading to me Korney Chukovsky’s book Unusual Tales that was translated into Urdu. His creative freedom in customising the tales as he read out loud was infectious and entertaining. It signalled me to be inventive as a young child,’ she writes. When asked about influences, she lists out authors and artists in equal measure.

It was a “life-changing” lecture by a visiting curator from the V&A, London in 1988 that turned her attention to the art form, at a time when “it was regarded as tourist kitsch and derided as a craft technique. As a young artist, I was intuitively seeking a catalyst to open new territories in an effort to transport myself from the mindless malaise injected and perpetuated by the dictatorial regime of Muhammad Zia-ul-Haq. Because the discipline was considered the antithesis of avant-garde, I looked to change its status and narrative. What others saw as enslavement to tradition, I recognised as a path to expand the medium from within, embracing the complexities of craft and rigour in order to open up possibilities for dialogue.”

Her paintings received accolades in Pakistan, emboldening her to accept an invitation to display her work in Washington DC. She was then accepted to pursue an MFA at Rhode Island School of Design (RISD). She has lived in the USA ever since; in 2013 she was the recipient of the US Department of State Medal of Arts, presented to her by Hillary Clinton.

Over the years, Sikander has consistently broken away from the rigidity of miniatures — experimenting with wall drawings, installations, projections and immersive digital animations. “The last was a natural progression because its roots are in drawing. To create a form in traditional miniature painting, you have to build up 10 to 15 layers of watercolour with very little pigment and water in the brush.” Scans of her hand-drawn imagery are layered to create large-scale projections. “One is able to zoom into the drawing to such a degree that it becomes an entirely new terrain in and of itself.”

Her pieces have been displayed all over the world, in Tokyo, Sharjah, San Francisco, Venice, Copenhagen, Seoul, Dhaka, at the Museum of Modern Art, the Whitney, the Hirshhorn Museum and Sculpture Garden, amongst others. Gopi-Contagion is one piece that has circumvented the hallowed gallery space to be exhibited in an intensely public area. ‘To have my animations be part of Times Square’s digital history is astounding,’ she exclaimed in an interview with a leading online website.

She recently completed a well-received show, Apparatus of Power, at the Asia Society in Hong Kong. Two animations, Parallax and The Last Post, underline persistent themes and motifs in her work. “Post-colonial tensions are a recurring point of observation in my work, and Hong Kong’s colonial legacy and the evolution of its identity provide a relevant backdrop on which to practice malleability of form and meaning…. Imaginative possibilities abound within the world itself, not just within the realm of the mind.” In The Last Post, a stationary male figure — referred to as ‘The East India Company man’ — shatters into a million fragments. In her continued efforts to subvert traditions, she repeats symbols that, when disjointed from their contexts, add new layers to her work. One example is ‘Gopi-Hair’, the black shapes that also feature in Gopi-Contagion. These are in fact thousands of drawings of the hairstyles of Krishna’s gopis, disembodied and turned into abstract forms that flow across the screens. “Tradition and identity are inherited to a certain degree and to grow as an individual, we sometimes have to branch off or forgo those strings in order to achieve something original. Contemporaneity is about challenging the status quo.”

Embracing ethnic heritage and diverse cultures is something she’s passionate about. She shuns the increasing anti-Muslim sentiment in the US, continuing to live in New York City and raising her son with the same pluralist values that she grew up with. She shuttles between homes and studios in New York, Lahore and Seville, and wherever work takes her. “As a transnational artist I have multiple places I work from. My heart is my filter for truth and home is in its cavern.”

With an illustrious 25-year career to look back on, Sikander still has much to look forward to. “My first permanent campus art will get installed at Princeton University this year, challenging the American academic campus’ usual trajectories of the obligatory Calders and Picassos. Amongst several works are a 70-foot mosaic and 25-foot glass piece.” Another is her ongoing solo show Ecstasy as Sublime, Heart as Vector on view at the MAXXI in Rome that is designed by the late Zaha Hadid. “It is such an honour to have my work engage with hers,” she says.

Surprisingly, she has not shown as much in India. “If one of the museums in India, say the Kiran Nadar, who own several of my works, would like to organise an exhibition, I’d be very glad. Choices I made early on in my career took me into a non-commercial direction. I produce works directly with museums and academic institutions, thus a collaboration as such would be welcome.”

This article was originally published in Verve magazine, July 2016.

common place is a selection of writing on art, design and culture. All text is copyrighted unless otherwise specified. Please do not reproduce without written permission.